Good things come to those who sweat! Grab a pair of dumbbells, give this total body HIIT Tabata workout a shot. This Tabata style routine utilizes 4 rounds of each exercise. You’ll perform as many reps as possible in 20 seconds followed by 10 seconds of rest. 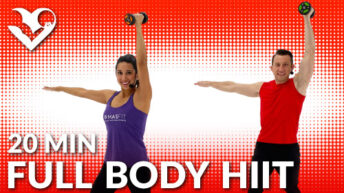