This workout is not for the faint of heart! This 4 part routine includes a warm up, HIIT home workout with dumbbells, intense abs routine, and a cool down. The full body workout only requires a pair of dumbbells and includes modifications to make it easier to customize the routine for your fitness level. Let’s go! 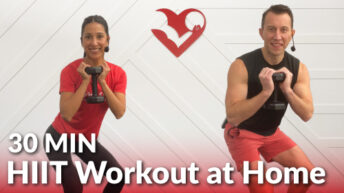